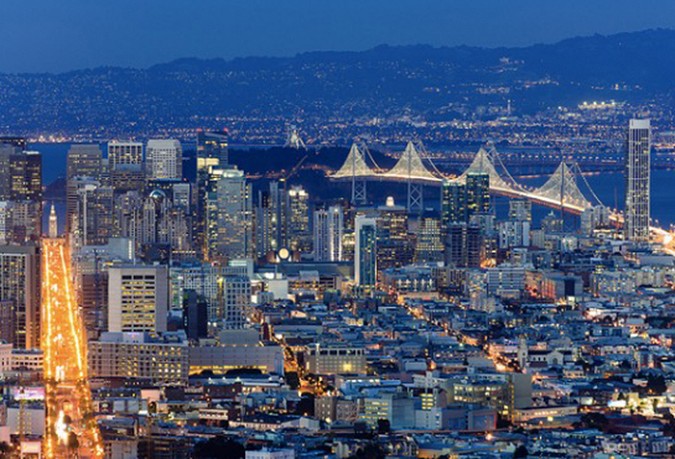 Centered in downtown San Francisco, the Ritz-Carlton Residences provide luxury urban living steps from iconic districts like the Financial District, Union Square and South of Market. At the intersection of Market and Geary streets, the Ritz-Carlton Residences makes its home in San Franciscoâ€™s first skyscraper. This historic building offers an ideal address for living in San Francisco, combining ready access to these vibrant neighborhoods with luxurious services and amenities.

In 1888, M.H. de Young commissioned the well-known architects, Burnham & Root, to design a signature building to house his newspaper, the San Francisco Chronicle. Completed in 1890, the building originally stood ten stories with a 220-foot clock tower. It was the city’s first skyscraper and the tallest building on the West Coast.

In 1905, fireworks launched in front of the building during a celebration of the mayor’s re-election ignited the wooden clock tower. Mr. de Young had the damaged tower removed and added two floors along Market Street as well as a 16-story annex along Kearny Street. A year later, the building survived the 1906 San Francisco earthquake. However, the fire that followed destroyed the interior. Willis Polk, renowned San Francisco architect (he has a street named after him), rebuilt the building. In 1924, the newspaper moved and the Chronicle Building was converted to an office building, becoming known as the de Young Building.

In the mid-1960s, the owners decided to modernize, covering the original stone exterior with aluminum, glass and porcelain paneling. In the mid-2000s, the original façade was thankfully restored and the building was converted to residential, with eight stories added to the existing 12-story structure. It was registered as a National Historic Landmark in 2004 and in late 2007, re-opened as the Ritz-Carlton Club and Residences.

The Financial District, a few blocks away, is known as the “Wall Street of the West.” The formal seriousness of historic stone buildings and the spacious glass-facades of newer skyscrapers set the stage for commerce. San Francisco’s Fortune 500 companies – McKesson, Wells Fargo, PG&E, Charles Schwab, GAP and Salesforce.com – are located here. Likewise, San Francisco-founded companies – Bechtel, Levi Strauss & Co. and Kimpton Hotels – are headquartered here too.

Financial institutions and law firms aside, locals seek out the many award-winning eateries in the Financial District. Hakkasan, right across the street, regularly makes the “best of” lists for its high-end Chinese cuisine. The city’s oldest restaurant, Tadich Grill (circa 1849), serves fresh fish and fresh cocktails every day except Sunday in its original California Street location. Walk a few blocks further to the waterfront’s Embarcadero for postcard-worthy views. Foggy mornings or sunny afternoons, looking at the San Francisco Bay, the Bay Bridge and Treasure Island never gets old. Continue to the foot of Market Street to step inside the beautiful Ferry Building. The hub that shuttles ferry boats to and from the port, it also features the city’s biggest farmers market and a bustling food-artisan marketplace proudly offering locally-made chocolate, cheeses, charcuterie, olives, breads and wines.

Two blocks west of the Ritz-Carlton Residences is shopping heaven, San Francisco’s Union Square. Shop for runway fashions in designers’ stores like Prada, Jimmy Choo and John Varvatos. Browse through the beautiful fabrics at the famous Britex Fabrics. Still more shopping destinations read like a who’s who of retail: The tony department stores, Saks Fifth Avenue and Neiman Marcus, anchor the central square. A block away along the Stockton Street promenade are Barney’s and Macy’s en route to the Westfield Centre, home to Bloomingdales and Nordstrom. High-end boutiques crowd next to each other on Maiden Lane and Post Street with names such as Gucci, Burberry and Cartier. Locals and visitors alike make time to visit San Francisco’s own Shreve & Co. and the infamous Gump’s.

Alongside all this retail are some of San Francisco’s favorite restaurants. Stop by Scala’s Bistro, next door to Saks, for pasta. Venture down the alley for true French cuisine at Café Claude on Claude Lane. On Market Street, find spots like Bluestem Brasserie and Delarosa. For destination dining, make reservations at nearby Michael Mina or Campton Place.

South of Market, or SoMa, has established itself as a vital San Francisco neighborhood, offering an abundance of museums, sports, businesses and dining spots.

Walk to the city’s top museums, steps from the Ritz-Carlton Residences. SF MOMA recently tripled its gallery space to show off worldwide exhibitions, its own exceptional collection and a living wall of 19,000 plants. Down the street, visit the Yerba Buena Center for the Arts and the Contemporary Jewish Museum. Nearby, AT&T Park hosts the San Francisco Giants where the three-time World Series champions play to regularly sold-out crowds at the waterfront ballpark. Adding to the SoMa sports culture, the new arena for the NBA’s Golden State Warriors is under construction in nearby China Basin.

SoMa is also home to many a tech firm, part of an unfailing spirit of discovery that is the DNA of San Francisco. Salesforce.com, straddling SoMa and the Financial District, claims the tallest building in San Francisco. Household names like LinkedIn and Airbnb employ thousands of techies in SoMa along with success stories like Square and Care, a home health care agency. Mix with the ubiquitous hoodies-jeans-sneakers attired hipster crowd at the gourmet food trucks or coveted coffee houses to talk MVPs and all-night hackathons.

For more information about the Ritz-Carlton Residences, please contact us at info@residencessf.com or call us at 415.321.7077.